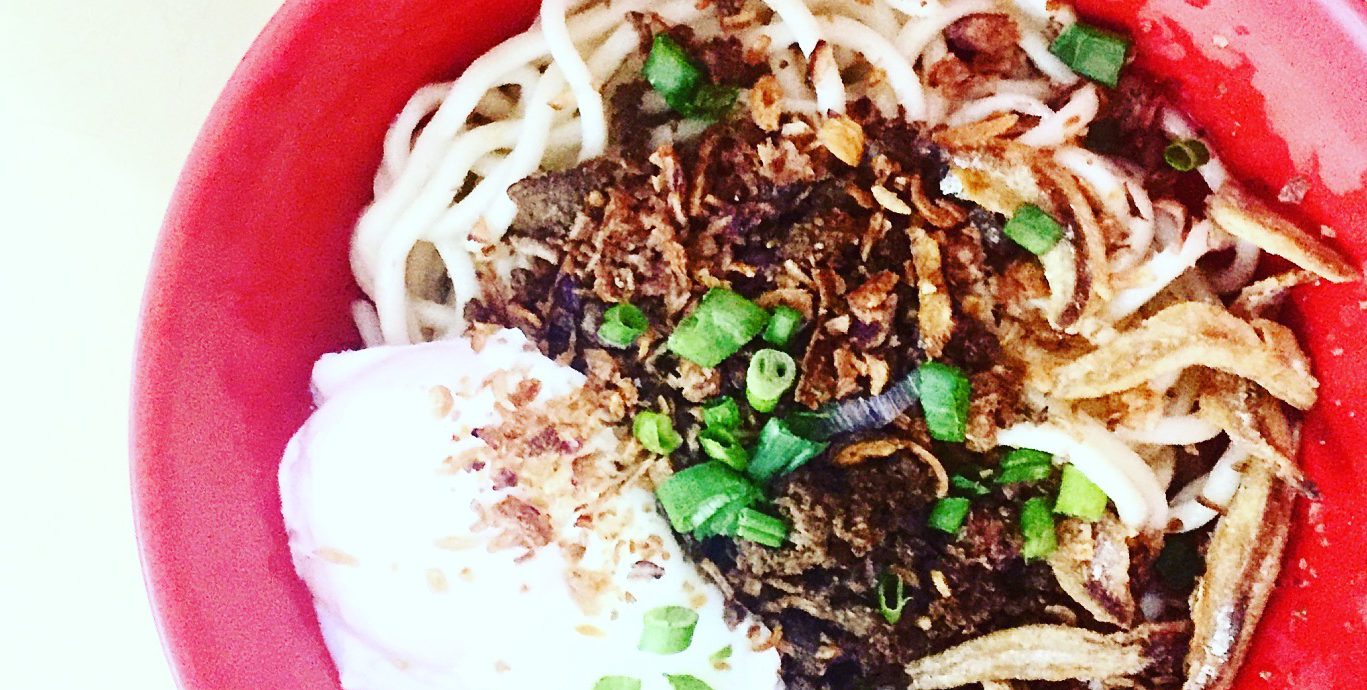 While Kuala Lumpur has some gorgeous architecture — like the stunning and imposing Petronas Towers — it is not a particularly beautiful city. It feels like so many places where the approach to urban planning is…. mysterious.

The streets literally go in circles, and you will likely make at least one u-turn every time you’re in a car because you simply can’t start out in the right direction (there’s probably an interesting parable there).

Sometimes it’s wonderful to get lost in the chaos. Sometimes less so. It’s the pace of a city that is simultaneously booming and standing still. But what KL lacks in looks and city planning, it more than makes up for in culture and cuisine.

The mix of Malay, Chinese, Indian, Middle Eastern, and European food has been such a surprise. Luckily I brought a lot of loose-fitting clothes on this trip.

Whether grabbing a glorious plate of noodles in a Chinatown food court, indulging in a massive plate of Indian delights from an unassuming street cart, journeying to a new neighborhood to try the famous — and original — chilli pan mee noodles, or having a Scandinavian breakfast while Duran Duran plays on the sound system, I’ve been blown away by the flavors and spirit of each place.

Interesting, rich, indulgent taste profiles can cost anywhere from $2 for more food than you should eat in one sitting to $10. Price-wise, the most expensive aspect of going out in KL is definitely the alcohol. Even then, you can get a gin and tonic with a quality spirit for just $5. But I digress…

Every local place seems to specialize in one type of food — a specialty that they’ve mastered and serve with love every day. 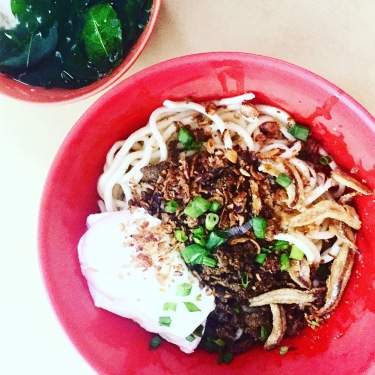 When I got to Restoran Kin Kin, I was so hot and sweaty, I must have looked terrifying. I’d walked from our apartment in Changkat, which Google said would take about 20 minutes. Alas, it was more like 40; and in the blazing sun, I’d also chosen to carry my black backpack, which not only weighed me down but helped my body temperature reach new heights.

I was the only Westerner in Kin Kin, and while I turned a few heads, no one seemed surprised by another hot American coming to try the famous chilli pan mee noodles.

I’d heard about this place from my friend Eric who used to live here and now resides in Shanghai. In fact, Eric sent me an incredible list of restaurants throughout the city that I’ve slowly and efficiently been making me way through.

The waiter at Kin Kin came to my table, looked at me nervously, raised one finger, and said “one bowl?” I nodded enthusiastically. No menu required. I was eager to try the house specialty, which I assumed was what the one bowl would be.

And it was. Beautiful. Like a Southeast Asian carbonara — a comparison that probably neither Kin Kin nor the Italians would appreciate, but nonetheless, you understand what I mean.

Perfectly cooked noodles with egg, chilis, and minced pork served with a fork for lifting and a spoon for spinning.  It was an absolute delight from start to finish, and I found myself devastated as I finished my one bowl.

I actually contemplated another bowl — I mean, surely I’d burned a thousand calories on my heat walk — but I decided to exercise some control.

I wanted to linger at my table after finishing my food. First because I was still cooling down. Second because I was sitting right near a man who seemed to be the boss. All the waiters would check with him regularly, perhaps about what to charge. My waiter went to him several times and pointed at me. No idea why. But they’d both smile, so I took it as a good thing.

When I finally got up to go, I wanted to take their picture, but the boss was laser focused on observing everything happening in his restaurant. If that’s what it takes to maintain something so wonderful, I wasn’t going to interrupt. 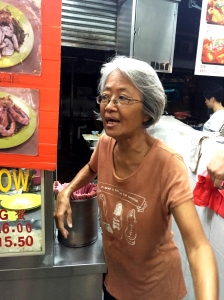 In an unassuming food court off Petaling Street in Chinatown, a range of Malay, Chinese, and Indian food is cooked for what seems like a thousand locals and tourists everyday. It can be incredibly overwhelming to make a choice… even if you are craving something particular, you’re likely to order differently. Maybe the glossy pictures of the various items persuade you, or perhaps it’s the passionate representatives at each station. The overall hygiene of the place is a bit questionable, but let’s look past that.

When we walked in, I had zero idea where to begin or what I wanted. So — in a rare instance for me — I followed. I followed one of our local guides to where he was going, and I’m glad I did. He brought me over to a grey-haired woman, smiling yet stern, who seemed to look me up and down when I said without confidence, “Noodles?”

Our local guide jumped in and ordered for me: the speciality of the station, teo chew char knew teow. Behind the noodle guardian worked a man, who we were told has been at this station making this specialty since he was 16 — roughly 45 years. He hardly looked up from the wok, even when I smiled, waved, and tried to take a picture. He had wok to do.

A few minutes later, a glorious plate of hot, delicious, and indulgently oily noodles were presented before me. The list of ingredients seemed simple, but there were so many layers of flavor in each bite. The price? Approximately $1. After I consumed it all in record time, I walked back over to the station to say thank you. Then, that’s when I got a smile.

One of the places Eric told me I had to try was going to be a bit of a mission: AMBIGA’S STALL – INDIAN. Great lunch. This has no name it’s just a stall across / in front of what used to be called SOMERSET serviced apartment. Which changed names now to ???. But watch the Petronas film we made for Deepavali and you will recognize Ambiga’s face. Ok! 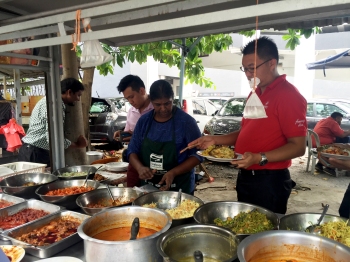 There were tons of stalls in this area, conveniently right near our apartment. Every day I walked by them all looking for Ambiga but without success. Maybe I wasn’t at the right intersection, or I’d looked at the wrong frame grab and had a totally different person in mind? Then on the early side of lunch one day, about three weeks into my month in Kuala Lumpur, the stalls were just setting up and I saw her. It was a bit ridiculous, but I must have audibly squealed.

Ambiga’s display of Indian food was glorious. Everything looked incredibly fresh, rich, and like something I must eat. I walked up to the cart and was handed a plate of rice by Ambiga’s cohort — the base on which I would build my meal.

When I finally caught Ambiga’s eye, I asked her if she was the one and only Ambiga I’d been trying to find. She looked at me quizzically… I guess it’s not a question she gets often. I explained that a friend had made the film for Deepavali that she was in; then she beamed shyly, “Oh, yes.”

When I’d created a feast fit for four people all on one plate just for me, I decided I was ready to pay. Ambiga looked at my selections in dismay. “No meat?” I thought I had some there, but clearly not enough.

Ambiga immediately began to load up even more food on the plate, wanting me to try everything. My lunch was very happily (for me) in her hands.

I’ll have you know that I ate every bite of food on that plate… so many flavors, rich textures, and delicate balances. I was unstoppable.

I watched Ambiga and the regulars that frequented her stall throughout my meal. There was such an overwhelming love of food and community here. I sat in awe of it actually. No hustle or trying to move people in and out the way it can be at popular lunch spots in the States. I wanted to eat here every day.

Ambiga would come to check on me once in a while, and we chatted a bit more about what I was doing in KL — my answer to that question was simple at this point in my journey: “eating.”

I came to Ambiga’s nameless stall on my last day in Malaysia. I was late, and there wasn’t much food left, but no matter. When Ambiga saw me, she smiled and without a word began preparing a plate. She introduced me to her sister who I hadn’t met before, and, this may sound weird to say, I felt adopted by them. They would discuss what I needed more of on my plate and watch me proudly as I smiled with every bite. 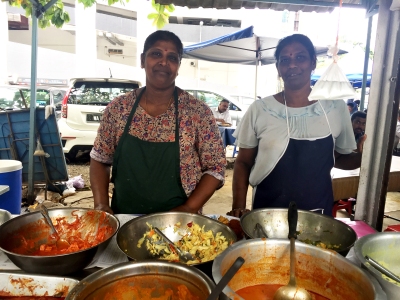 I realize I may be gushing here, but it’s so special to me when you can feel connected to a person who you have no context with other than their food. I was sad when I said goodbye to Ambiga and her sister. Next time I’m in KL, without question, they’ll be my first stop for lunch.

And if you’re ever in KL, you must go too (I’ll draw you a map). Tell her the curly blonde-haired girl from New York sent you. Then, try everything Ambiga has to offer.