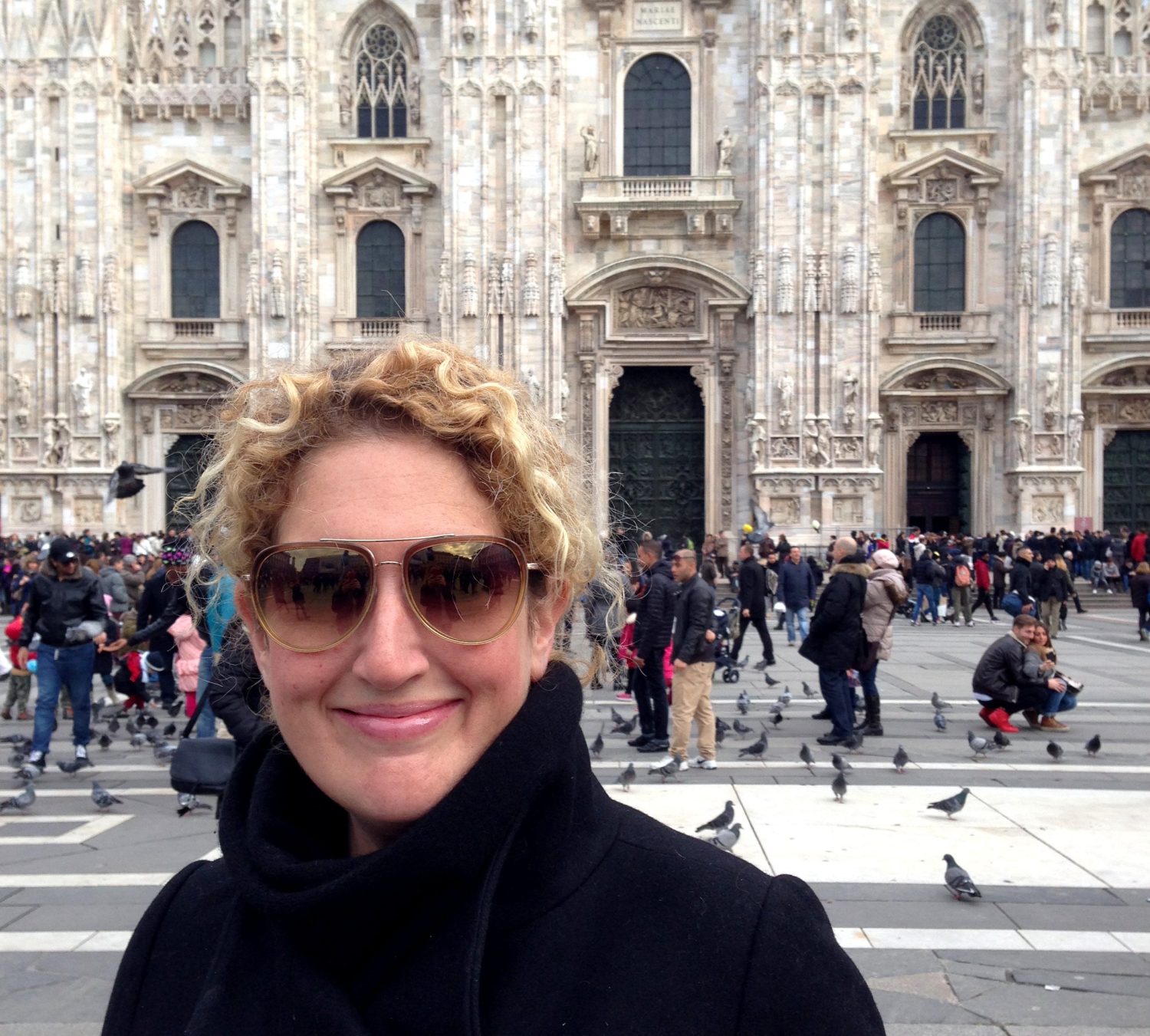 It’s hard to know exactly where my della Torre family line begins. Many accounts say it was with Charlemagne — and our crest indicates this “fact” with its prominent fleur-de-lis — but almost every person with European heritage can claim as much.

What I am certain of is that I can trace my family back to the Middle Ages and a small village in northern Lombardy, just a few hours from Milan and a stone’s throw from Lake Como. The village, Primaluna, is where my ancestors had risen to prominence and then led Milan as dukes, lords, princes, captains, and imperial vicars until they were brutally ousted by the Visconti family. We had a good run at ruling from approximately 1259 until 1332 with only a few papal interventions, a couple of wars, and a bout of exile along the way.

Coat of Arms from the Torriani Book of Hours. The eagle in this version of the crest represents Napo della Torre and his status as Imperial Vicar of Milan in 1274.

Guido della Torre was the Lord of Milan from 1302-1312. Here is a depiction of him leading the Guelph faction against Emperor Henry VII, whose mission was to bring Lombardy and all of what is now Italy under the control of the Holy Roman Empire. According to the research I’ve found, Guido was fighting to keep communal, city-state rules and laws in place. 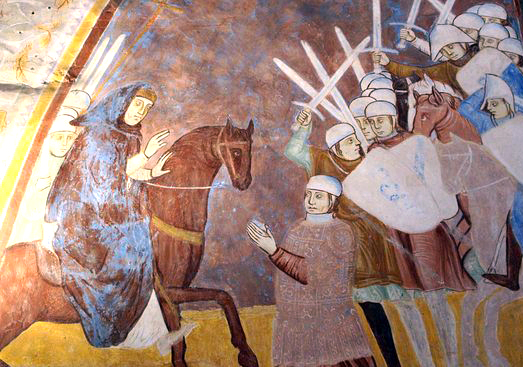 Napo della Torre yielding to Ottone Visconti at the battle of Desio. This fresco is on the wall of the Rocca Borromeo di Angera, a castle that had been owned by the della Torre until they lost it to the Visconti.

At some point after the Visconti takeover, my branch of the family moved into Switzerland, right over the neighboring Alps. 1626 is when I can pick up a direct link to the village of Soglio and to Gaudenzio Traila de Turriani, my 8th great grandfather. The probable reason for the move north is that my family had become Protestant during the Italian Reformation and had to leave Lombardy during the subsequent Inquisition. Once they were in Switzerland, all records of my family are from the Evangelical and Reformed Church.

An important note to keep the names straight: della Torre, meaning “of the tower,” is the same as Torriani (“those of the tower”) which became Turriani in Switzerland, then Torriani, Toriani, and eventually Torian, which was my mother’s maiden name.

When and why the Torriani left Catholicism, I can’t be sure yet. When and why they soon left Switzerland too, well, I could venture a guess about freedom, land, and opportunity because they would ultimately find all these things in the New World — but they would do so for a price far greater than they could have imagined.

In 1738 — after my family had enjoyed a peaceful, remote mountain life — they traveled to Rotterdam and boarded a 100-ton ship for the Colonies — a ship that left Europe with 300 passengers but after delays, storms, mutinies, starvation, and a wreck made landing six months later in Virginia with only 90.

Thankfully several of my family survived but many were lost, including my 6th great grandmother and three of her children. Those who made it to shore didn’t let the devastating journey deter them. They soon started new lives on the Dan River, taking on 200 acres of land and marrying into the descendants of famous pirates and history-making pioneers. But these are all stories for another day…

For now, I want to take you to where it all began, Primaluna. 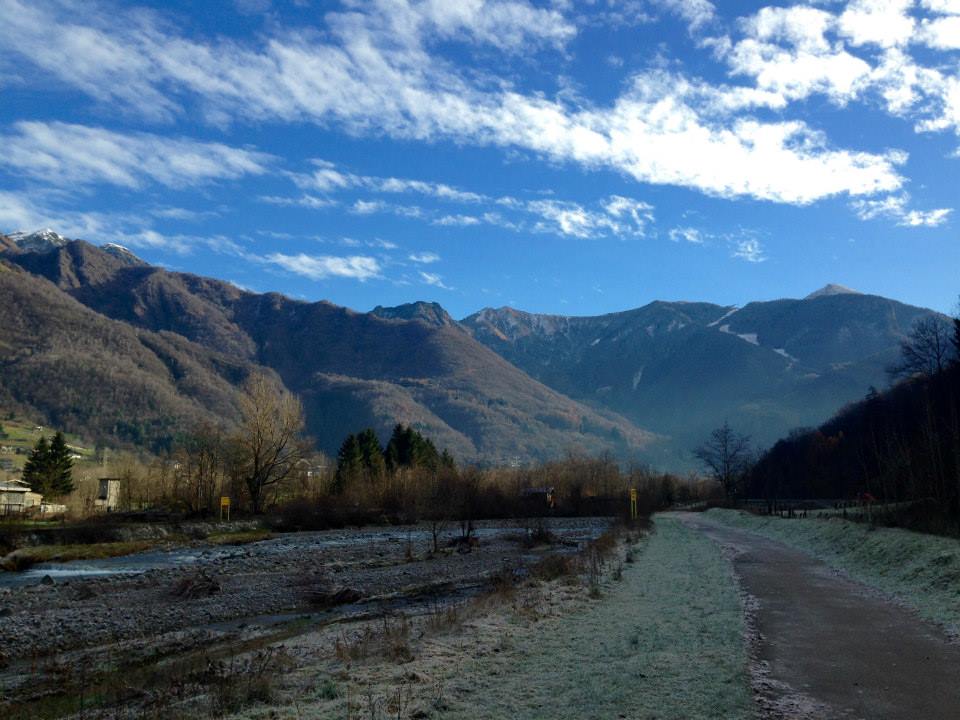 Despite its location near the star-studded Lake Como, Primaluna is an unassuming if modest village. Its glamour comes from gorgeous scenery, not the jet set — with sweeping, epic mountains everywhere you look. The air is crisp and chilled in December, but there isn’t snow yet to attract the hordes of people who will make their way here for skiing in a month’s time. In the off-season, the population hovers around 2,000. 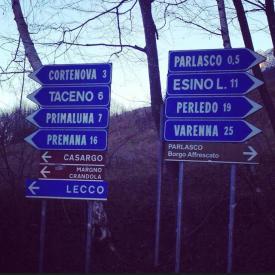 We arrive late, mostly because navigating small medieval roads in the dark takes longer than expected (and, full disclosure, my travel companion, Jo, and I may have also had an indulgent and lengthy lunch along the way). But our B&B hosts, Paola and Gianbattista, are patiently awaiting us. When I’d written to them about this trip and researching my family history, their response was not only enthusiastic, they immediately set a meeting with the local historian for the minute we got to town. They seem genuinely as excited for this journey as I am.

Before we settle into our accommodations, or even take our luggage out of the car, we all set off to the Torriani House. Where else would the local historian live but in my ancestral home? When our hosts tell me where we are going, I am flabberghasted that the house would have such a prominent position right on the main square, but I will soon understand why.

The first thing you notice about the house is a long, sturdy wall that surrounds an interior garden. Although hard to see at the late hour of our visit, what the historian wants to show me straightaway is the carving of my family crest that sits just beside the front door. He explains that it holds key elements of our story: the fleur-de-lis for Charlemagne, the tower that della Torre comes from, and the crescent moon, which he notes, represents an ancestor’s time fighting in the Crusades. That ancestor, Martino, was known known as Il Gigante (“The Giant”); he died during the Siege of Damascus in 1148.

Learning that my family’s history includes fighting in the Crusades, it starts to make me uncomfortable. Until now I had assumed the crescent moon had to do with the fact that we were from a town whose name means “First Moon.” I prefer this reasoning and the symbolism that a first or new moon brings: beginnings and growth. But owning up to my family’s history in all its forms is important; and, as you can imagine, it will only get more complicated when our story picks up again in Virginia. 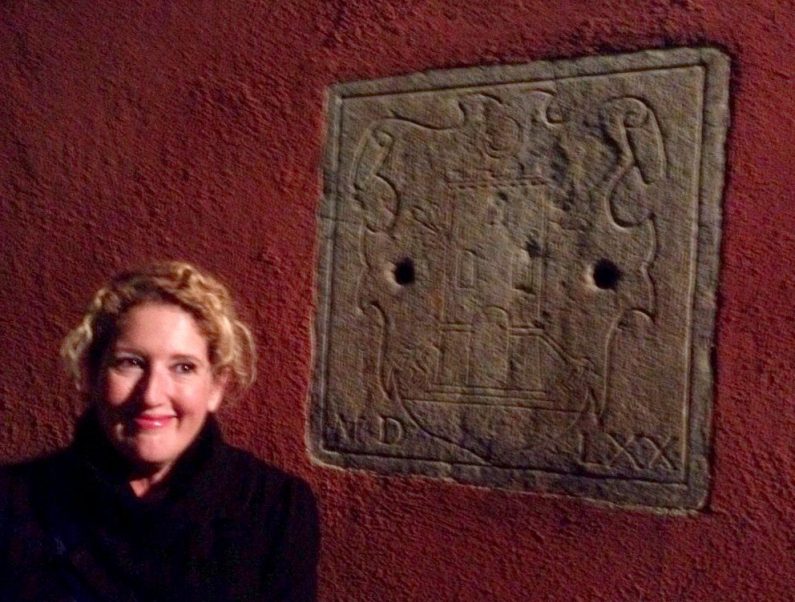 With the family crest, in the garden of the Torriani House

Meeting with the local historian, who just so happens to live in the Torriani House

The start of the della Torre family tree

The Primaluna historian doesn’t speak English, but between my passable Italian and the help of Paola, we spend the next couple of hours talking about the Torriani’s exploits (good and bad), their loss to the Visconti, and their ultimate dispersal to Switzerland, throughout Italy, and America.

The Torriani family crest on the ceiling of the ancestral home

With my wonderful hosts and the local historian in the Torriani House, Primaluna

We also spend a great deal of time exploring the house itself — its shockingly thick stone walls and the family crests that are painted all throughout. While you could envision that this sprawling house was once majestic, befitting its dukes and lords, it’s now a traditional home where the historian’s daughter is busy making dinner and nursing her young infant as we spread pages of my family tree out on the couch.

The next morning Jo and I start to explore town in the daylight, and the impact of the Torriani, who haven’t lived here in at least a century, is still present everywhere. The main square is adorned with the crest as is almost every doorjamb and doorknob; and nearly every street in the old village has our name. 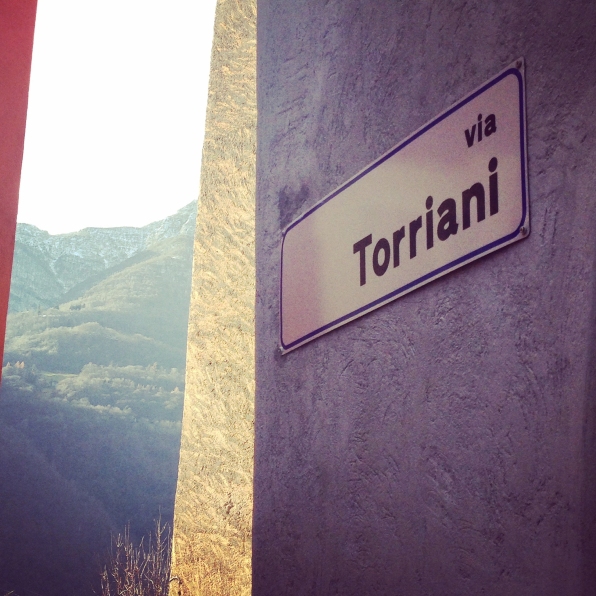 Where the streets have my family name… 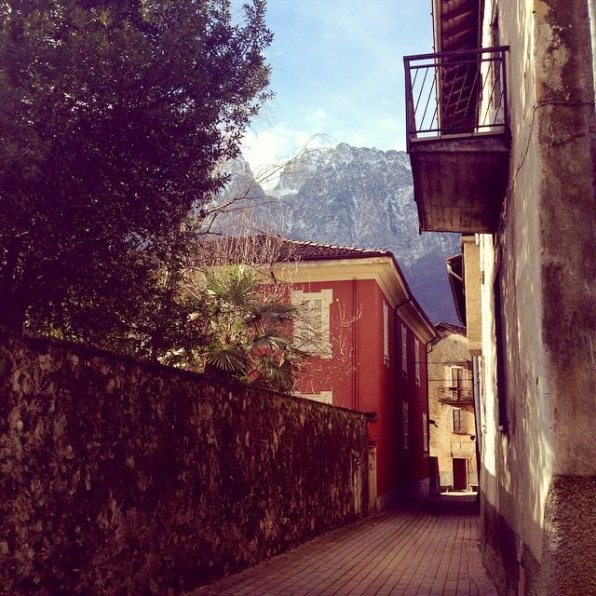 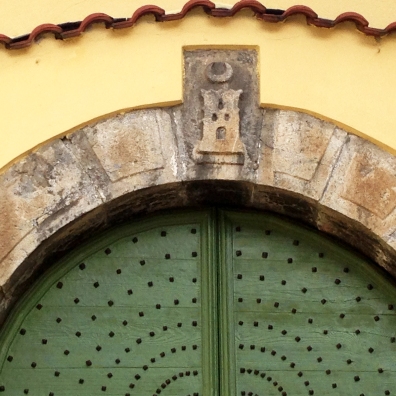 For the most part, the small streets are empty, and we make our way up hills and around narrow passages. Finally we arrive at the remnants of the infamous tower. Standing just a dozen feet tall now, it doesn’t have the grand stature depicted in our crest, but the fact that it’s still here at all is a marvel. I stare at it wondering about all of the people who stood on this ground before me, my ancestors who could have never imagined the world today or an umpteenth granddaughter making her way back. 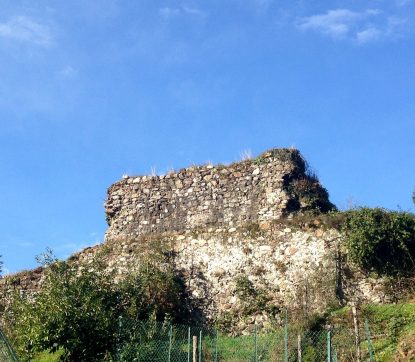 The remnants of the tower that our name comes from, Primaluna 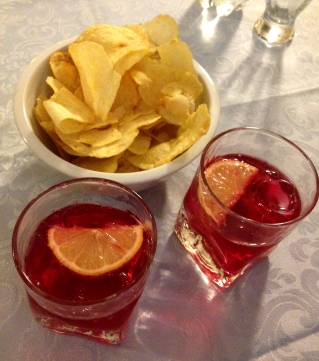 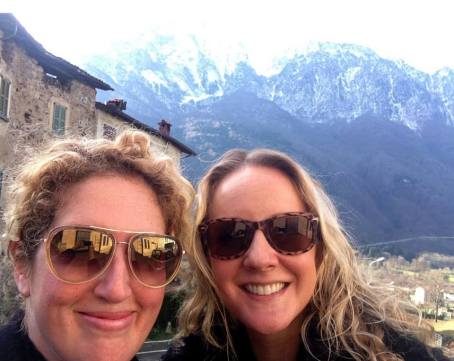 Jo and I exploring Primaluna

To the locals we do encounter, we are obviously tourists, and nearly everyone stares at us as we wander into bars for aperitivo and restaurants for dinner.

Some chat with us and ask why we’re here. When I explain in the best Italian I can muster, that I’m descended from the Torriani, the general response is a dropped jaw and an “Oh!” One person even goes so far as to exclaim, “The duchess has returned!”

At that response I start thinking about how I can reclaim the Torriani house as my own. I won’t try a non-violent “Visconti” though and remove the historian and his family, but maybe someday we can work something out. To spend more time here would mean everything, and to do it in the halls and rooms where my ancestors walked and lived, extraordinary.

For good measure during our stay (and because how can you write about Italy without mentioning food?), we make time for the best cheese shop you’ll ever come across, which is poetically out in the middle of a massive field populated by cows, goats, and sheep.

Stocking up on cheese at Beri Formaggi 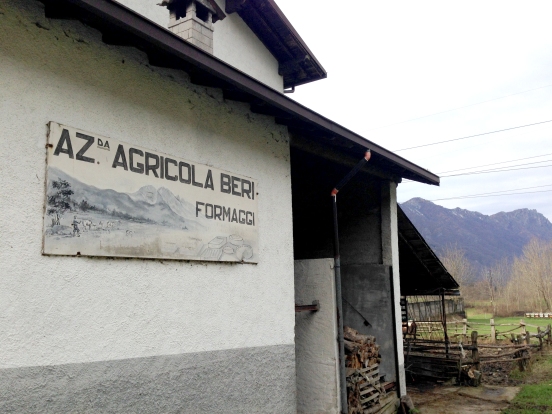 We’re in Beri Formaggi for a delightful eternity, loading up on amazing and stinky dairy to take back to London (Jo) and Rome (me) for the holidays. I wouldn’t generally think of cheese as a souvenir from my travels, but somehow here it makes delicious sense (and it’s actually all consumed within a matter of days).

We also go to the nearest point on Lake Como where we find ourselves looking straight across to Switzerland. Did my ancestors stand in this same spot and say, “We’re going that way!”? Unfortunately, Jo and I don’t have time to go that way too, not on this trip. But I will someday.

When we leave Primaluna, I probably have more questions than when we arrived. There’s still so much I want to learn and understand about this region and my family’s place in it. And I’ll be back. This is, of course, just the beginning…

At Lake Como. Just beyond those mountains is Soglio, Switzerland. The next stop on my ancestral journey.